“A calorie is a calorie.”

“If I just workout hard enough to burn off the calories I eat, I can eat whatever I want and I won’t gain weight.”

The idea that all calories are created equally is one that stems from a German nutritionist in 1878.  This is what Max Rubner called is “isodynamic law.”  It’s an idea that, regardless of where the calorie came from, the body would extract energy from it equally regardless of source (fats, proteins, carbohydrates).

The idea that I would like to discuss today is a little different.  The other idea that we can discuss is that calories are NOT created equal.  But rather, the TYPE of calorie we choose to eat will dictate HOW our body partitions it.  That is, do we store it for later, or use it immediately?

Any of a large group of organic compounds occurring in foods and living tissues and including sugars, starch, and cellulose. They contain hydrogen and oxygen in the same ratio as water (2:1) and typically can be broken down to release energy in the animal body.

In our case, sugars and starches.  Breads, pasta, flour, cakes, crackers, cereals, even fruit to a degree.  You get the idea.

But equally as important as the source of carbohydrates is what happens within the body as a result of eating these foods.  This is perhaps the key to this whole discussion.

The action of insulin is critical to a functioning human body (just ask anyone with Type 1 Diabetes).  But just like with other things, we often abuse this process.  We ingest so much sugar throughout our day that insulin is constantly being released.  This causes the insulin receptors to become less sensitive, so more and more must be released for the same effects.  This is essentially what causes Type II Diabetes.

So with this information, I would like to say that, in my opinion, the body does not decide what to do with calories it receives based on the number of calories, but the type.  The TYPE of calorie plays a role in determining the hormonal effect that plays out.

Whenever we consume foods that are high in sugar, we get the greatest insulin release.  Unless we USE all those calories, the excess energy gets stored in our liver and in our cells…as fat.  So if we are constantly overloading our body with foods that create a large insulin response, and if we can never “tap” into our fat depots for energy, then we won’t ever get the opportunity to burn the fat that we want to lose!

Now, a handful of different factors come into play here.  Each person has a different sensitivity to insulin.  Some people can literally eat whatever they want and their body composition never changes (bastards).  Some people are at the other end of the spectrum.  But in my experience, most people are somewhere in the middle.

What we DO know is that when insulin is secreted or chronically elevated, fat accumulates in the fat tissue.  We also know that we secrete insulin primarily in response to carbohydrate intake.  (It should be noted that protein has a similar effect on insulin, but the action of glucagon may affect total blood sugar levels, unlike carbohydrates.)

We all know that America, as a whole, is a fat country.  It’s almost embarrassing.  But if we look at WHERE our calories come from, it makes a little more sense. 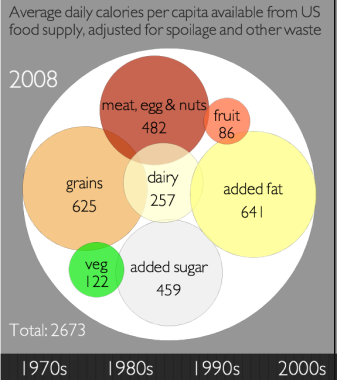 The chart above shows what the distribution of food that is available to American consumers.  I’ll go ahead and make the link (although possibly inaccurate) between availability and consumption.  What is so shocking to me is the amount of added sugar, added fat, and grains that we consume (or are exposed to) as a nation.

The amount of processed foods that we are exposed to is shocking.  And we wonder why many American’s have weight issues?!  But I digress….

I’m not trying to argue that insulin is the bad guy.  If you’re a bodybuilder, you could argue that insulin is one of the most anabolic hormones there is.  And you’d be right.  Insulin spikes after a workout are critical for someone looking to get bigger.  However, I will note that this article is written to inform and provide a general overview.  For the average person looking to get healthier, understanding what happens when we eat certain foods is important.

So in review, I feel it is important to KNOW how certain foods affect your body.  Eating a 200 calorie Snickers bar is going to effect you differently than eating a 200 calorie serving of salmon.  It doesn’t take a lot to figure that one out.  We feel different after we eat it and our body treats them differently.

EATING FAT DOES NOT MAKE YOU FAT…so eat more bacon 🙂

Oh yea, if you haven’t checked out Gary Taube’s book Why We Get Fat: And What to Do About It, it’s a solid resource regarding this topic.  Obviously, read it and evaluate it.  Don’t just take it for face value.  Always be asking “why”!

Why We Get Fat Lecture

View all posts by skylerzarndt

One thought on “Calories are NOT Created Equal! (Part 2)”